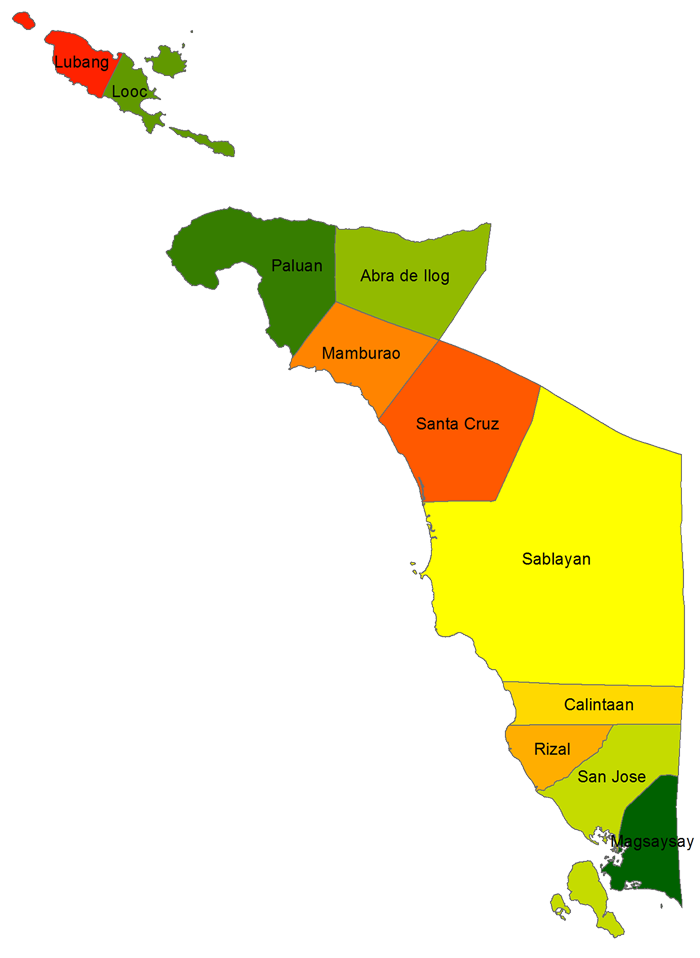 Weather: Occidental Mindoro has two distinct weather types: rainy season and dry season. Rains begin to fall in the province in late May, intensifying through June, July, August, September and October, then gradually subsides in November.  The months of August and September are the wettest period, with storms directly passing through the area. On the other hand, dry season starts in November, with rainfall subsiding in intensity, and altogether ceasing in January, February, March and April. March and April are the driest period, with cloudless skies and parched earth characterizing the general area. Temperature range is from 26 °C (79 °F) in the windy uplands to 32 °C (90 °F) in the lowlands.

Transportation: By air, it takes 30 minutes from Manila to San Jose via small aircraft company providing chartered flights to the province. By Sea, it takes 3 hours from Batangas City pier to Abra de Ilog Pier via Roll-on, Roll-off vessels of the Montenegro Shipping Lines and Besta Lines.

Mindoro Island was originally known to the ancients as Ma-i. It was formally called Mait, and known to the Chinese traders before the coming of the Spanish. Its existence was mentioned in the old Chinese chronicles in 775 A.D. and more elaborately in 1225. It was a major anchorage in the Southeast Asia trade route during the pre-Philippines period. Chinese, Arab and Indian merchants traded with the natives. In 1570, the Spanish began to explore the island and named it Mina de Oro (“mine of gold”) after finding some of the precious metal, though no major gold discoveries were ever made.

The natives of Mindoro were called Manguianes by the Spaniards. But the natives refer to themselves by their ethnic or clan identification. There were seven such ethnic or clan distinctions, which are differentiated by language and areas where each can be found.

The Mangyans, as they are now anthropologically known, do not have a warrior society. They are a peaceful, shy but friendly people. They are rarely known to be hostile, and have had no significant record of violent conflict with other people in the entire history of the province. They grow root crops in forest clearings (slash and burn farms), and hunt wild animals in the forest for their meat needs.

There are no authentic documents in existence explaining the original stock of the Mangyan people, but later theoreticians postulate that they migrated from Indonesia before 775 A.D. They hopped from island to island, until finally settling down permanently in Mindoro. It appeared that clan settlements existed in the North as well as in the southern ends of the island. By 779, the southwest coast of the island was already a known trading center, and its fine natural harbor frequented by Arab, Indian and Chinese maritime traders who plied the route. But there was no attempt of subjugation, just trading.

There are 4 outlying islands surrounding the mainland of Occidental Mindoro which are under the jurisdiction of the province.

The following is a list of points of interest relating to the Occidental Mindoro province:

The following are the most frequently asked questions about the Occidental Mindoro province.

What does Occidental Mindoro mean?
Mindoro is derived from the Spanish term “mina de oro” which means “gold mine”.

To learn more about the various climate types in the Philippines, and for a Climate Map, click the link below…